is the source of inspiration for the Star Sounds Orchestra Project. The work by the suisse mathematican Hans Cousto comes up with the theoretical frame for many SSO - compositions. The planetary symphonic gongs,  played by Jens have been directly inspired by the concept of the cosmic octave. The PLANETS - album, which presents all the various tunings of the solar system in in epical ambient space is the central work of SSO.

The following pages are dedicated to the Cosmic Octave and they hand out the basic informations of this sphere harmonical concept, which explains the holistic effects of frequencies and rhythms.

You will find practical tuning data of the planets as well as some hints for the holistic applications of this science. You are invited to share your planetary tuned music with us. In case your creativity leads to any results, that are compatible with the law of the cosmic octave, we suggest you connect with the special distribution of planetary tuned music, as it is established within the website of www.planetware.de

Enjoy the great peace and freedom of true cosmic soundmusic° 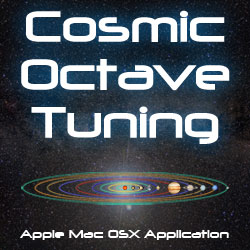